“Didn’t we have a lovely time the day we went to Bournemouth!

A beautiful day, we sang all the way and arrived the night before you know

Then Saturday morn, it seemed like at dawn, we entered our first competition,

With apologies to Fiddlers Dram!

On the hottest weekend of the year so far, we made our way down a jam-packed M3 to the sea-side, for the eighty-ninth Bournemouth Music Competitions Festival, a prestigious event established in 1926

No buckets and spades for us but a ridiculous amount of luggage for an over-night stay; hair drier, tongs, make-up, shoes and spares of almost everything, ‘just in case’. We also had two stage outfits in order to reduce a potential boredom penalty from the adjudicator seeing us go up and down the stage steps as we sang our way through 5 contest categories!

Well, if you’re going for the day you might as well enter everything!

Some early birds managed the obligatory paddle in the sea and even a loop or two on the big wheel. Others battled the Friday night mass exodus south after work but everyone was up bright and early (well, early anyway) for a run-through of our first category entries with the lovely Janet Shell conducting us. 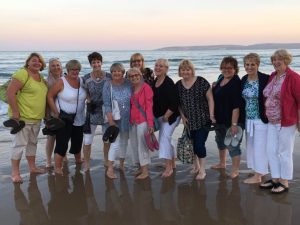 We entered the following categories:

It was great to see so many friends from other choruses. They obviously had the same philosophy too, why enter just the Barbershop category and enjoy a few hours by the sea on a glorious summer day when you can enter five or six categories and use a whole pack of face mopping wet-wipes sitting in the stifling heat of a theatre for 10 hours?

By the time it got to the Barbershop category, we were perhaps looking a little worse for wear and most of us were make-up less, it had melted and run off hours ago. But,  with a lick of lipstick and ‘T & T’ we were ready to sing again.

We sang two gorgeous songs and earned an ‘outstanding’ from the adjudicator, the only one of the day. And having given the adjudicator the ‘tingle factor’ and with ‘chords still ringing’ in her ears… bloomin’ heck … we got the Bournemouth Festival Choir of the Year award! 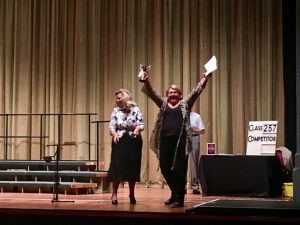 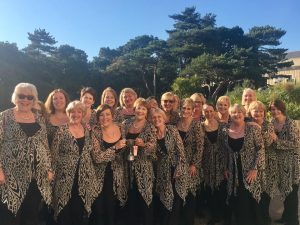 The golden Choir of the Year cup can be seen here reflecting off the perspiration on our glowing faces. 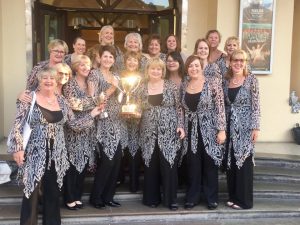 Our two chorus quartets, Chaos Theory and Synergy, gluttons for punishment, then sang in the quartet contest 12 hours after we had first set foot on stage!

They were fantastic, earning first and second places respectively 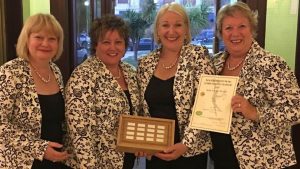 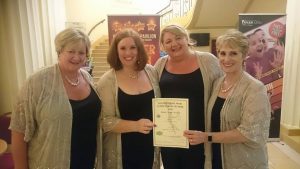 The grand grade II listed Bournemouth Pavilion Theatre and Concert Hall, opened in 1929 as the largest venue for public entertainment in the country. It still has many of its original deco features hinting at its former splendour. 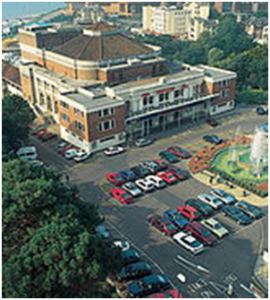 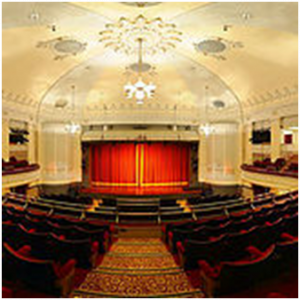 Mezzo Soprano, Gaynor won scholarships to the University of Warwick and Royal Academy of Music. She combines a busy performing career with teaching both privately and at the University of Warwick; recent operatic engagements having included Rome and the USA. A member of Welsh National Opera for three years, she has worked for the Royal Opera, Opera North, D’Oyly Carte Mid-Wales and English Touring Opera. Concerts have included the London Mozart Players, London Bach Orchestra, CBSO Royal Philharmonic and The Philharmonia. In 2001 she won the London Lieder Prize. In 2009 she was made an Associate of the Royal Academy of Music. Gaynor is an adjudicator member of The British and International Federation of Festivals.